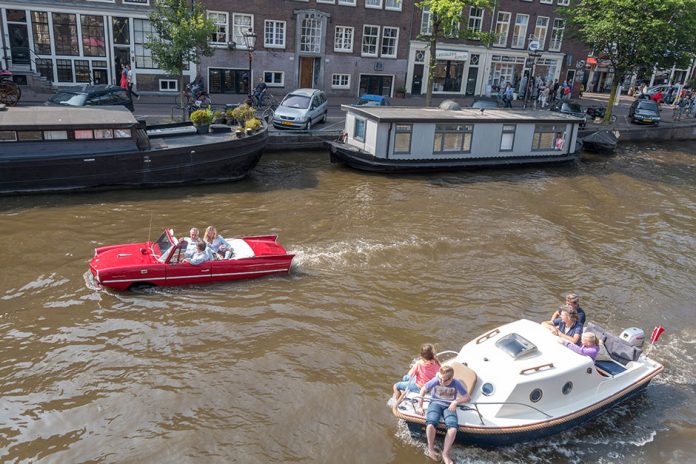 Have you ever been in your car on a rainy day, and floods were reaching close to a meter or two?

This must be disastrous for your engine, and sometimes you just wish you can have a car that swims.

But who said this was impossible?

A few years from now, you may be lucky enough to float your own car to work.

Floating electric cars in the pipeline

In 2013, Hideo Tsurumaki, a former employee of Toyota Motor, started building a small, watertight electric vehicle that can float in floods, or even cruise at low speeds, according to media reports.

“I intend to put one outside our house,” Tsurumaki said of the cars which were inspired by the 2011 Tsunami in Japan. “Many others will probably think the same.”

Tsurumaki’s electric city commuter, which is approximately the same size as a golf cart, features a lightweight body and batteries under each of its four seats, as reported by NDTV.

It continued: “It accelerates by pulling a lever on the steering wheel, which is partly to save space. The batteries are replaceable, so users won’t have to wait the six hours it takes for a full charge. The car will travel as much as 160 kilometers on one charge, with a top speed of 80 kilometers per hour.”

Bloomberg reveals that the biggest challenge in building this car is its cost.

“Electric vehicles are already expensive to produce, because of the high prices of parts such as batteries. The floating car will have additional expenses, such as for sealants to make it watertight,” it said.

Must read: Update: Emirates rescues Airbus A380 from extinction

While floating cars seem to be new to the audience, these innovations may already be moving around without having attracted much attention yet.

Tesla’s CEO Elon Musk announced a year ago that “the Model S does actually float well enough to turn it into a boat, with the rotation of its wheels providing thrust in the water.”

He tweeted: “We *def* don’t recommend this, but Model S floats well enough to turn it into a boat for short periods of time. Thrust via wheel rotation.”

According to the Verge, a technology website, Musk tweeted the comment after sharing a link to a video showing a Model S swimming through a flooded tunnel in Kazakhstan.

“The car certainly makes better headway than vehicles stranded in the same tunnel, pushing through the water with relative ease and making it to dry land on the other side,” as reported by the Verge.

Musk explained that the drive unit and battery on the Model S were all sealed to keep out liquids.

The billionaire and entrepreneur tweeted later: “I am still planning to do a sports sub car that can drive on roads. Just a side project. Limited market potential.”

However, floating cars are not new. They go back to the 19th century.

Dayton Daily News, an international news site, reveals that an Amphicar was sold for between $2,800 and $3,300, depending on the production year.

It said that many of them were found being customized today with paint and accessories.

Check this: Like family: Careem has become more than just a taxi service

A study by Sam Asano, who was named by MIT as one of the most influential inventors in the 20th century, revealed that the Amphicar did not continue because it was not quite acceptable.

The fact that it didn’t continue was probably because it was neither a good car nor a good boat.

“The car function of the Amphicar was probably acceptable, but the boat part just wasn’t. Its gunwales were too low,” he said.

“My conclusion was that if the designer wanted to make a true seaworthy boat, it would have to be a much larger and taller vehicle, and thus it would have been impractical.”

Perhaps the new car technologies that emerged in the past few years may help these innovations gain momentum among people today. Only time can tell!