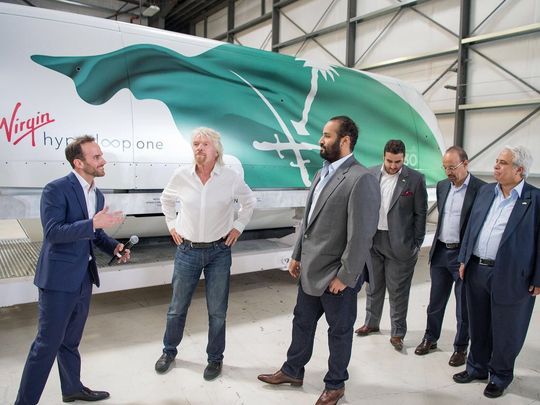 Saudi already has a $22.5 billion Riyadh metro transit system underway, with 6 metro lines, spanning 176 km and 85 stations, to be fully operational by 2021.

Also about ready to launch is the $8.2bn Haramein high speed rail project linking Mecca and Medina via King Abdullah Economic City, a 453 km long train that can make the trip in 2h, 52 minutes, stopping in 5 stations along the way.

But what’s coming will likely change the landscape of transport in Saudi: Hyperloop.

USA Today published a recent report saying that a potential tube-based magnetic levitation transportation system in theory able to reach speeds of 700 mph  known as hyperloop is looking more and more likely to land in Saudi.

As Vision 2030 plans a shift from an oil-based to a renewable energy based economy, Hyperloop runs on electricity that could be powered by solar photo-voltaic cells.

“Hyperloop is the catalyst to enable all fourth-generation technologies to flourish in the Kingdom while creating a vibrant society and thriving economy through visionary cities and high-tech clusters,” the Saudi defense minister Mohammed bin Salman bin Abdulaziz said in a statement.

“In Saudi Arabia, the 10-hour trip between Riyadh and Jeddah would take 76 minutes, says Virgin Hyperloop One and others that put together a feasibility study.

Read: Trump era US visas keeping Saudis out as Kingdom hastens to bring tourists in

Building a hyperloop system, on average, costs anywhere between $20-$40 million dollars per km with estimated ROI from 8-10 years  but varies according to population density, so that in places like India, ROI takes less time as more people use the system.

Saudi Arabia is among a handful of countries including Russia, India and Scandinavia that have entered into feasibility studies with the tech startup, which ultimately aims to sell its engineering services to anyone willing to plunk down billions to make the radical transportation concept a reality, according to USA today.

Noiseless, green and needing little right of way as it is built on pylons, Hyperloop projects could increase the value of the land around them. In California, an 8 km2 of desert land in Quay Valley,  where approval to build the first hyperloop rose property values more than 4 times from $2 to $9 per m2.

Abu Dhabi entered into talks in 2017 with Hyperloop Transportation Technologies (HTT) for a link between the emirate and Al ain.

Hyperloop was proposed in a 2013 white paper by Tesla CEO Elon Musk.

VIDEO: Are property sale prices going up in Dubai to meet demand criteria?

Over the weekend, Saudi’s crown prince went to Los Angeles to meet with representatives of Hollywood studios, Snap Inc. and Virgin Hyperloop One,  looking to meet with executives from Alphabet Inc.’s Google, Uber Technologies Inc. and Apple Inc., Bloomberg reported.

“The prince’s agenda includes a push for Amazon to consider working with Saudi Arabia’s Ministry of Energy on building a data center in the country, which would be the first in the Middle East for the world’s largest cloud provider,” Bloomberg reported.