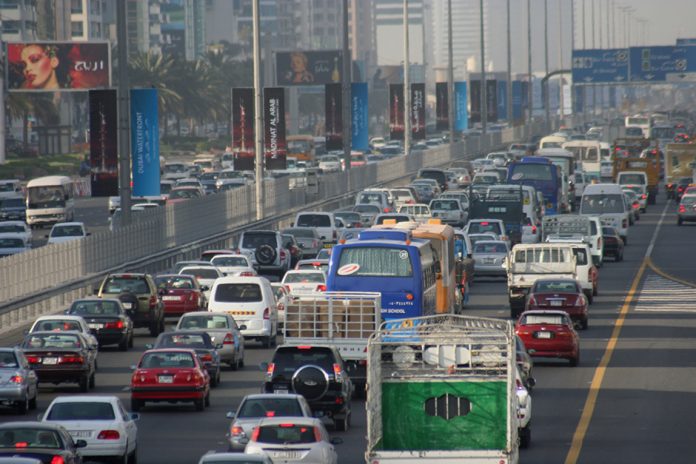 Christmas is supposed to be a happy time for people in the UAE. But it’s also when traffic is at its peak as people are out to buy gifts and enjoy the festive atmosphere in the country.

Heavy traffic congestion in the UAE is a cause of distress especially for people who travel daily from Sharjah to Dubai, traditionally a bad spot, but driving around shopping centers and major thoroughfares towards the end of the year could be nerve wracking.

What is causing this heavy congestion in the UAE?

Also, Dubai’s growing daytime population too is a major cause of congestion. According to Dubai Statistics Centre, the resident population of Dubai is 2.8 million as of December 2017.

These factors do not only cause congestion and accidents but they also cause tremendous losses for businesses.

According to RTA, in 2014, traffic congestion cost Dubai’s economy around AED 4.6 billion in lost time and fuel.

Must read: This is why Souq.com is jealous from Careem and soon Emirates

GulfRetail contacted the RTA for the latest figures about the impact of traffic congestion on UAE economy but until publishing it did not receive any feedback.

If anything, the numbers could be worse than stated below.

The latest available statistics are from 2015 quoting Alp Eke, director, senior economist for the MENA region – Market Insights & Strategy, NBAD who said that the cost of congestion on the UAE economy in 2014 could easily exceed AED10 billion ($2.72bn).

“The economic impact of traffic congestion in lost time and fuel in the UAE in 2015 could have been as high as AED12 billion, almost 1 per cent of the country’s GDP,” he said.

With the increased traffic in UAE and the rising economic costs, it has become necessary to find smart solutions to curb losses to the economy.

Dubai has recently launched a number of schemes to move forward in this direction, as part of its Smart City initiative.

Check this: Souq.com goes from strength to international strength

Driverless cars may be a good solution to traffic accidents, reducing the number of fatalities as a result of human error.

The goal is for the vehicles to be a fleet of autonomous taxis, according to Futurism, a platform for technology news. This will encourage people in the UAE to avoid using their personal cars while curbing traffic in the emirate.  It would substantially as well reduce the need to park anywhere, and free up more space for cars.

A study by Nidal Abou Zaki, Managing Director at Orient Planet Group, published in GulfRetail, earlier this year reveals that RTA plans to increase the share of public transport in Dubai from where it currently sits at 15 to 30 per cent by 2030 while public transport account for 60 per cent in other major cities in New York and London.

The RTA is currently working to expand the rail network to 421 km by 2030, while options such as autonomous transport systems and marine transport designed to navigate the creek and coasts are also being developed, said Abou Zaki.

Moreover, RTA awarded a French consortium an AED0.6 billion ($2.88bn) contract to expand the city’s metro system, it announced last year, in preparation for Expo 2020. Route 2020 will not only facilitate the Expo during its six months, but will also serve around 270,000 residents living in growing communities such as The Gardens, Discovery Gardens, Al Furjan, Jumeirah Golf Estates and Dubai Investment Park as well as Al Maktoum International Airport in the future.

The Hyperloop One transport link is also being designed to facilitate speedy transportation between the Emirates.

By 2020, Dubai will become home to the world’s first Hyperloop One transport link. This multi-billion-dollar super-transport system is expected to lessen travel time between Dubai and the country’s capital to as little as 12 minutes, according to Abou Zaki.

According to Cnet, a platform for tech review, the hyperloop capsule will be 9 feet (2.7 meters) across and weigh 20 tons, with a passenger capacity of 28 to 40 people.  There are estimates that show that 1 capsule can depart every 40-45 seconds, which amounts to 3400 people an hour, 64,000 plus people a day

The cause is simpler than you think