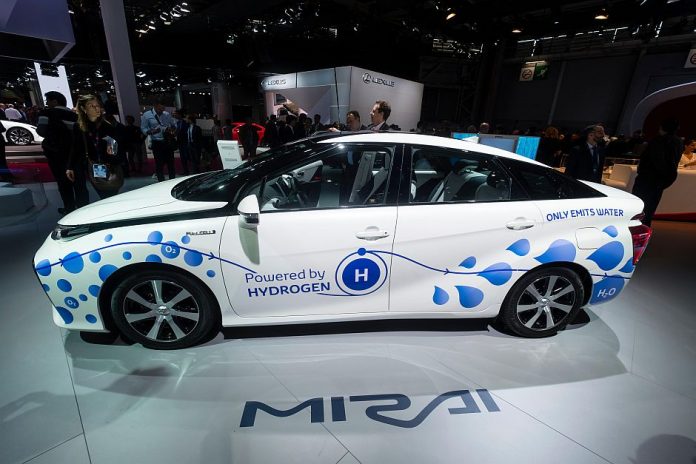 The UAE Vision 2021 National Agenda focuses on improving the quality of air, preserving water resources, increasing the contribution of clean energy and implementing green growth plans. The country has set its sights on increasing the average fuel efficiency of cars on its roads to 20.8 kilometres per litre by 2028 to meet its pledge to cut carbon emissions.

And the UAE’s police departments are taking the lead by introducing fuel-efficient vehicles to its fleet:

Sharjah Police said that they are also test-driving Toyota’s zero-emission fuel cell technology in the form of the hydrogen fuel cell-powered Toyota Mirai.

A percentage of these vehicles will form part of the Anjad patrol and they will be equipped with hi-tech equipment.

Brigadier Saif Al Ziri Al Shamsi, Commander-in-Chief of Sharjah Police, said they are keen to support the cause of the environment by adding eco-friendly vehicles to their fleet.

“The introduction of environment-friendly vehicles to our patrol fleet is important as the force aims to adopt more sustainable energy sources, including renewable energy, as well as reducing carbon emissions,” Brig Al Shamsi said.

By using the hybrid vehicles, Sharjah Police aim to spread awareness of greener transport solutions, while aiding its efforts for more sustainable mobility options, he added.

Toyota Prius hybrid cars do not require external charging or any behavioural change from the driver. The Prius uses a petrol engine and an electric motor; it can be powered by the engine, the electric motor or a combination of both, where the system automatically chooses the most efficient mode for the best mileage and lowest emissions.

This leads to in high fuel efficiency, without compromising the driver experience, officials said.

Compared to conventional cars of the same engine size, the new Prius offers around 60 per cent enhanced fuel efficiency due to its improved hybrid system, delivering around 26km per litre, and saving significant amounts of fuel during its operation.

Abu Dhabi Police has used environmentally vehicles for many years, namely a four-wheel Chevrolet Tahoe for traffic patrols. The car was chosen after an in-depth study, following up the technical development in the field of environment-friendly cars

The car is characterised with use of latest technology and double energy supply system that includes fuel and electricity. The vehicle can be used in all types of missions, and does not pollute the air, or emit carbon dioxide or other toxic gases.

The green-car has been designed according to the specifications and conditions required for private sedans used by police patrols in terms of size, power of the engine, endurance and capacity.

Careem to be valued at $2.5 billion if Uber acquisition goes...