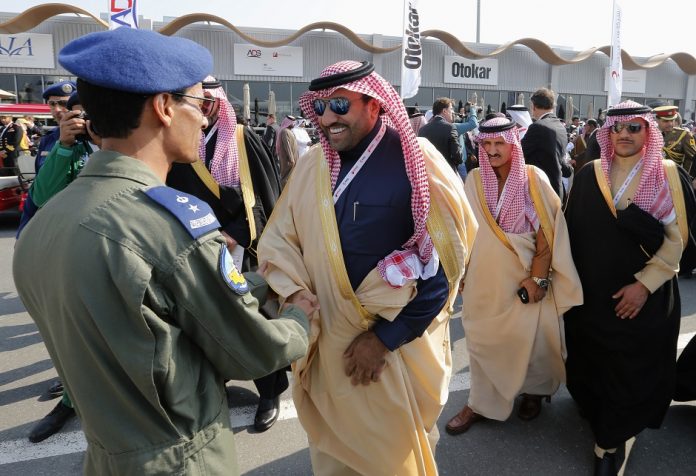 Saudi Arabia has arrested a defense ministry official on charges of receiving a $267,000 bribe and abusing his position, the Saudi Press Agency (SPA) reported on Tuesday.

“The official sought to facilitate irregular procedures for the disbursement of financial dues to a company, taking advantage of his professional influence,” a statement quoted Attorney General Sheikh Saud al-Mujib as saying.

Reuters said that Saudi Arabia’s Crown Prince, Mohammed bin Salman, who also serves as defense minister, told a U.S. newspaper in February 2018, that the purge was like chemotherapy of “the cancer of corruption”.

Saudi Prince Turki bin Abdullah, son of late King Abdullah and a former governor of Riyadh, has spent the last 9 months detained, 5 of which in the glitzy Riyadh Ritz-Carlton hotel.

56 people are still in Saudi government custody, awaiting trial, after failing to be exonerated or reach financial settlements with the government, including Prince Turki.

We are wondering why he is still detailed. Are you?

Related: Where and who is detained Saudi chairman of ADG, Amr al-Dabbagh?

In late March, American pop singer, Cher, has tweeted her support for the royal, appealing to Crown Prince Mohammed bin Salman to “be kind … and let him go”.

Perhaps too many incidents of corruption needed investigation

Back in 2013, the Financial Times reported the U.S. Department of Justice was looking into the relationship between London-based Barclays and Prince Turki bin Abdullah, who then occupied the powerful post of governor of Riyadh.

The EU Reporter, a European business site, said the Justice Department wanted to know if Barclays violated the US Foreign Corrupt Practices Act that forbids bribes or gifts in kind in return for lucrative business.

“The inquiry is centered around an incident that occurred in 2002 involving Barclays and (prince) Turki. The Prince’s company, Al-Obayya Corp. has for years acted as the local partner for foreign companies seeking to expand into the complicated and opaque Saudi market,” said EU Reporter.

Read: Could Saudi have arrested activists trying to destabilize the kingdom?

It explained that Barclays was under investigation for payments to Turki through Al Obayya to destroy the creditworthiness of Saudi philanthropist and businessman Sheikh Mohammed bin Issa Al Jaber, whose construction company, Jadawel, had built two city compounds near Riyadh and Al Khobar in the Eastern Province in the 1990s used to house US military personnel.

“In 2002, the Saudi government defaulted on payments to Al Jaber, resulting in the collapse of the credit structure of close to a billion dollars that involved a consortium of Japanese, British, German and American banks,” said EU Reporter.

“Investigators in Riyadh have identified Turki bin Abdullah and Ibrahim Al-Assaf as major beneficiaries of the inexplicable decision by the Saudi government to default,” the EU media added.

A second incident involving Prince Turki, also co-founder of Petrosaudi, has to do with his company being embroiled in the 1Malaysia Development Bhd (1MDB) scandal.

The United States, according to EU Reporter, was investigating a multi-billion-dollar embezzlement of public funds in this project.

“Saudi authorities also accuse Turki of taking advantage of his influence as governor of Riyadh to take a huge commission in the costly project to construct the city’s urban train network,” said the EU Reporter.

The reference was for the biggest rail project that Saudi is still currently building, the Riyadh Metro, where more than 43,000 construction workers are employed.

Prince Turki was one of the 11 princes detained as a part of the anti-corruption drive, and is accused of corruption in the Riyadh Metro project and taking advantage of his influence to award contracts to his own companies, according to Reuters.

As deputy governor and governor of Riyadh province between 2013 and 2015, Prince Turki played a key role in the launch of a multibillion-dollar rapid transit project for the Saudi capital that is slated for completion in 2019.

The UK Telegraph reported that Prince Turki’s term as governor ended on 29 January 2015 when Faisal bin Bandar Al Saud was appointed to the post.

“The project will change the face of Riyadh and empower future Saudi generations to reach new heights of progress and prosperity,” the prince told Arab News in an exclusive interview in August 2013, when he was still Deputy Governor of Riyadh.

The entire project encompasses 85 stations and six main lines covering 176km, able to carry 3.6 million passengers a day, that will service most areas of Riyadh, including King Khaled International Airport and the King Abdullah Financial Centre.

The pricey project has faced setbacks and delays on numerous occasions due to a number of reasons, including project complexity, slow payment to contractors, and lower oil prices, to mention a few, but it looks to be on track now.

Riyadh metro on track for 2018

The soft opening of the metro will be in 2019, Saudi economy minister Mohammad Al Tuwaijri said.

Last December, SPA quoted Arriyadh Municipality as saying the metro is 66% complete and the trial operations will start by end of 2018, citing Prince Faisal Bin Bandar Bin Abdulaziz, governor of Riyadh and Arriyadh Development Authority (ADA) chairman, the public entity in charge of this project.

“The project is progressing according to plan,” Prince Faisal said.

The project was 54% complete last May.

By 2030, the number of daily car trips is projected to double from 7.4 million to 15 million and the number of hours spent on the city’s roads will climb from 2 million to 4.7 million as the average speed of a journey plummets from 45km/h to 18km/h, IRJ reported.

With more than 1500km of new roads planned by 2030, the network by itself will not be sufficient to prevent gridlock.

ADA  anticipates the metro and bus network will cut car usage by 803 million journeys per year or 10.9 billion vehicle-km. This is expected to reduce the cost of congestion to Riyadh’s economy by around $320 million per year.

ADA calculates that every $1 spent on public transport in the city will generate $3.4 in economic returns.

Test running started on the Riyadh metro on April 4 using an Alstom Metropolis trainset, according to Metro Report, an industry site.

The six-line network is being undertaken in three packages.

Lines 1 and 2 are being designed and built by the BACS consortium led by Bechtel and including Almabani General Contractors, Consolidated Contractors Company and Siemens under a $9·45bn contract.

The FAST consortium led by FCC and including Samsung C&T, Alstom, Strukton, Freyssinet Saudi Arabia, Typsa and Setec is to build lines 4, 5 and 6 for $7·82bn.