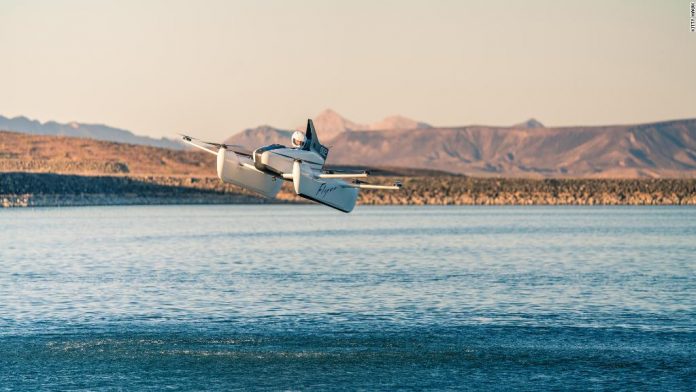 Following the reveal of its first prototype in 2017, the flying-car startup Kitty Hawk has now revealed the latest iteration of its innovative vehicle. The startup is funded by Google co-founder Larry Page, naming its vehicle “Flyer”. Named after the Wright brothers’ first aircraft prototype to successfully fly in 1903, the company is promising people that it will take less than an hour to learn how to pilot it.

According to lead engineer Todd Reichert in an interview with CNN’s Rachel Crane who was actually allowed to test pilot the Flyer, the vehicle has 12 moving parts: 10 motors, and 2 control sticks. The company insists on facilitating ease of use, and the convenience of driving one of these Flyers.

At the moment, the vehicle is being flown above water, for safety reasons. It is fully electrical, and can only remain in the air for 20 minutes currently.

Kitty Hawk’s CEO Sebastian Thrun hopes the vehicles will one day be able to fly at up to 100 mph over populated areas. “The No. 1 most important thing other than safety for us is societal acceptance,” he told CNN. “Will people be willing to fly on these devices, be willing to live next to these devices like this? That’s why opened this training facility in Lake Las Vegas — we’re here to learn from you, to see your reaction.”

Head over to Kitty Hawk’s site and you will find an application waiting to be filled by any interested customers, with preorders available.

CNN reported that 1500 flights have been conducted among interested business partners and social influencers.

Back in 2017, UAE unveiled a similar flying-car model, aimed to serve as an unmanned taxi vehicle for customers. Dubbed the Autonomous Air Taxi (AAT) and designed by German manufacturer Volocopter, the vehicle was commissioned by the Roads and Transport Authority (RTA).

CHECK THIS: Which is the No. 1 preferred mobile brand for Millennials?

No gas stations in sight? No problem. Rent this car