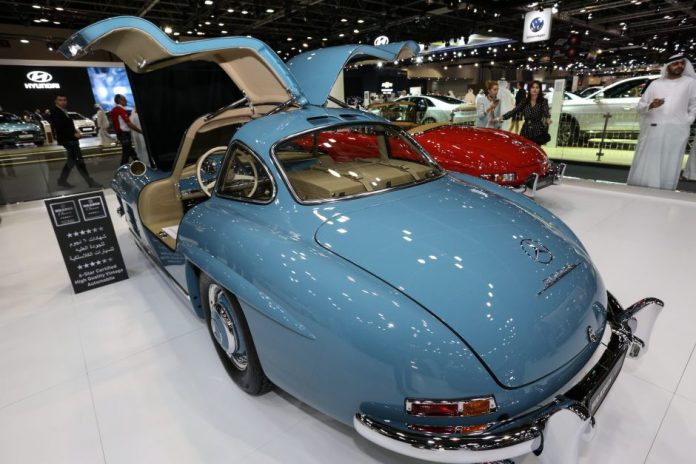 Dubai Motor Show’s 5 best blasts from the past

While it’s always exciting to see the latest cars and technology that manufacturers are rolling out at motor shows, some of the biggest crowd pleasers can be those classics and beauties from yesteryear that have been restored or maintained and help tell the story of how cars and SUVs got to where they are now.

As brands show us the future of motoring at the 2017 Dubai International Motor Show with their new-to-market models, including a host of electrified and autonomous vehicles, let’s take a minute to honor some classic cars of bygone eras.

Admire the wood-grain interiors, feel the well-worn leather and smell the exhaust fumes of our favourite five blasts from the past on display at the Middle East’s premier automotive event.

WATCH VIDEO: What are the top 10 most expensive cars in the world?

The Mercedes 300SL is widely considered to be the world’s first supercar. Brabus, as part of its restoration programme, has brought along not just the iconic Gullwinged version, but also the slightly less popular open-top to this year’s show.

Those wild gullwing doors aren’t just for show – the 300SL (or Sport Light) was a thinly-veiled racecar for the road, which meant not everything was designed with ergonomics in mind. Its unusually high sill made it difficult to enter and exit, which led to those now signature doors.

With the 2017 Dubai International Motor Show hosting a variety of awe-inspiring supercars, the 300SL will take you back to their origin.

The DB series was named in honor of then owner, Sir David Brown, and the name carries on even today in the form of the DB11. The DB5 was designed for Aston by Italian coachbuilder Carrozzeria Touring Superleggera and if you look closely enough, you’ll find little badges signifying that fact.

Not all interesting classics have to be sports cars from luxury brands, and the beautifully-restored Jimmy on GMC’s stand, in Exhibition Hall 2 at DWTC, proves that point perfectly.

Although we now take SUVs for granted, the Jimmy was one of the first to capitalise on this bigger-is-better trend. The Desert Fox package gave the Jimmy extra off-road ability, as well as added visual punch. While speed humps represent the bumpiest terrain many SUVs in the UAE cross today, this GMC will happily bash dunes all day long – and has been since 1979.

One of the most enduring sports cars of all-time, modern 911s can very clearly trace their roots back to the originals. A beautiful, early example of a 911 is on display at Chopard’s stand, at the Watch Lounge, fresh from the recent Chopard Classic Car Rally in the UAE, showing that classics remain drivable and enjoyable for modern owners and admirers alike.

The 911’s form has always been dictated by its unique layout (rear-engined, rear-wheel drive), and this earlier model is one of the purest expressions of the historic model.

Even the most mainstream cars from today can be the classics of tomorrow. A case-in-point is the lovingly maintained Nissan Sunny pick-up at the modified car display. What was once a popular, utilitarian vehicle has now been modified specifically for the tastes of its owner.

The front-end is from another iconic Nissan, the first-generation Skyline GT-R, and the bolted-on overfenders combine to give the car a unique aesthetic.

Like the idea of owning your own classic car? Take part in the online Classic Car auction at the show, taking place on Friday 17 November from 6pm-8pm at the Copart stand (Hall 7), which will feature approximately 50 classic cars, including beauties such as a 1974 Ferrari 365 GT4, 1985 Rolls-Royce Camargue and 1929 Mercedes-Benz SL300 to name few.

Even if it wanted to, can the Saudi PIF buy a...