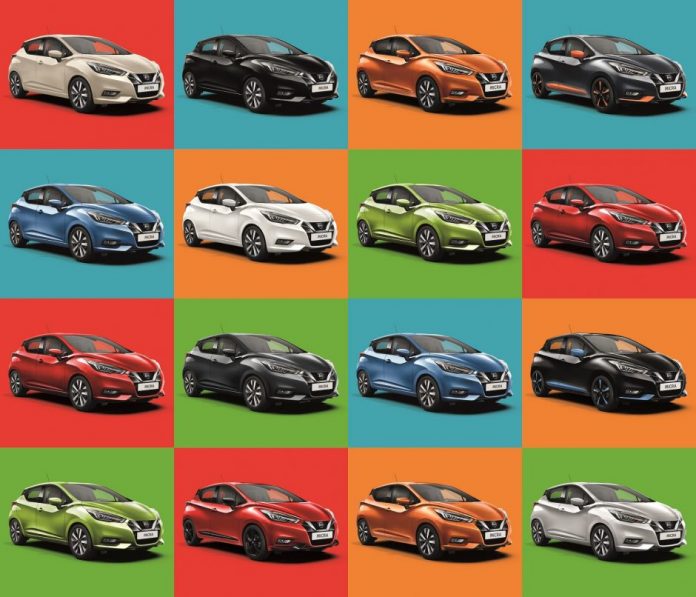 “Wear a red tie for job interviews”. Who has not heard the advice that red ties attract employers, like bulls are attracted to matadors’ capes?

Colors are also about temperature: red and orange are warm, while green and blue are cooler.

But colors define so much of our personality on any given day, and we change from somber moods to lighter moments, as suns set and moons rise or vice versa. Yet, our personality throughout the year is pretty stable, so we are either active or a couch potato; we like pop music or cherish the classics. These facts have not escaped Nissan, who is tailoring personality traits to the choices that buyers make when choosing a car, especially when it comes to exterior paints.

A pan-European study by Nissan revealed that the bulk of drivers there drove cars that essentially clash with their personality, where in fact 86 per cent of the time, buyers got the color wrong in the showroom.

A survey carried out by OnePoll in July 2017 questioned 1,000 motorists who own a car in each of these five countries – France, Germany, Spain, Italy and the UK.

“The research found that even though there were more vibrant exterior colours and personalisation options than before, car buyers were still too conservative when it came to picking paint,” Nissan reported in a statement.

GulfRetail contacted Mohammed Al Tawil, Deputy General Manager of Corporate Communications at Nissan Middle East FZE asking if the car company did any such study in the Middle East or the GCC, to which he said : “Unfortunately nothing was conducted here.”

Nonetheless, Nissan is giving potential buyers the chance to personalize the new Micra hatchback, which comes in 10 exterior colors.

The personalisation program allows for contrasting shades to be added to the bumpers, doors, wheels and door mirrors, in addition to catering to interior tastes, but found that one-third of those surveyed chose traditional grey or black for example, when their personality said that orange was best.

GulfRetail tried Chat Bot, the virtual robot developed by Nissan in collaboration with colour psychologist Karen Haller and delivered via Facebook, to see whether it can really determine, as it claims, the user’s personality that matches with the right color, in just two minutes. ( https://www.facebook.com/NissanMicraChatbotUK)

The 2-minute result for yours truly was platinum silver, because I was a swan who liked to listen to rock music. Not my color, but the Bot gives you the option of retaking the test. I did not.

Karen said: “Social factors come into play with colour choice. For example, in times of economic uncertainty, it is common for people to play it safe and pick a car with a neutral palette – such as black, white or grey, so I am not surprised that two-thirds of motorists are driving more conservative shades.”

“Often colour choices are based around aspirations, and black is often seen as aspirational, associated with high-end technologies and innovative brands. It may be that far from playing it safe; they are choosing what they perceive as the finer things in life.”

Priyanka Gaitonde, a Senior Colour Designer at Nissan Design Europe, commented: “The design priority for the all-new Nissan Micra from the very beginning was to put the customer at the heart of the vehicle. The new Chat Bot is an innovative way of extending what we set out to do in the design studio, to guide customers on the colours most suitable to them.”

Respondents driving the wrong-coloured car for their personality- poll results

Truck Colors, Inc., a U.S. based trucking company, says that there is more to picking out truck colors than one might think.

It said that colors could communicate power, trustworthiness, environmental friendliness, and much more about the brand of truck that people buy.

“Brands who want to communicate power, speed, and authority should choose red,” the company said.

“White also has the function of keeping your truck cooler by reflecting heat. On the flip side, it requires consistent washing, since white shows every speck of dirt on your truck.”

It continued that black is the top color for truck brands that want to communicate prestige and exclusivity, while silver represents security and trustworthiness and is also functional, because it does not require high maintenance cleaning like white does, but does not absorb as much heat as black.

“Blue is a color of strength and lighter shades of blue evoke joy and serenity, while darker shades like navy represent responsibility,” the company said.

“Green has become synonymous with eco-friendliness but also the color of money, which can represent wealth and prestige.”

Colors can reassure consumers, differentiate brands or drive businesses away. It has so many uses in day-to-day dealings and commerce.

Business owners have banked on colors to save on their electricity bills, whereas in a cold environment, they paint their lobbies with warm colors to give the impression of heat instead of spending more on energy. But some businesses, according to a Forbes 2017 article, paint offices green, because it makes employees more creative with their thought processes, opposite to what red does, which is more about short bursts of energy and also does not keep people on task.

Blue, according to the same article, has ancestral roots to early man seeing open skies and watering holes, as opposed to high rises and busy motorways, making the color a favourite with most people, though “blue collar” workers may disagree.

White is boring, but clean. It is the number one shirt color among ‘white collar’ workers. Orange is about good values, the color we see most with coupons. Red makes us hungry for a reason, and thus why KFC, McDonalds and others use it.

Finally black, or absence of color, is used to portray slick, sleek and chic, from cars to perfume, and is aimed at a refined audience with a sophisticated taste. Been in a stretch limo lalely?

why it took so long to reveal and what next?