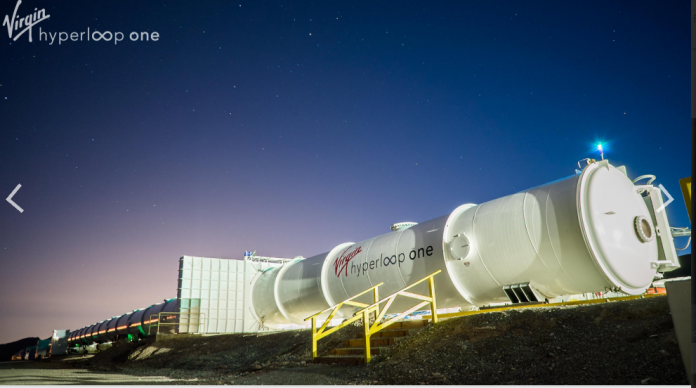 International port operator DP World and Virgin Hyperloop One are collaborating to launch ultra-fast hyperloop for cargo, in what they hope will revolutionize both the speed and cost of commerce.

“DP World Cargospeed” will aim to deliver goods at speeds of up to 620 miles per hour and link to existing roads, rail and air infrastructure.

DP World Cargospeed will move any cargo around the world in less than 14 hours but a timeline for completion was not specified.

Read: Hyperloop is promising futuristic designs, but will it be enough?

Tesla founder Elon Musk was behind the original idea of Hyperloop, a super-fast ground transport method, quicker than airplanes, but a much cheaper way to travel.

The U.S.-based company will be providing the technology behind the project and DP World is its largest investor.

The company announced that it achieved a new record speed in its test loop in Nevada, raised another $50 million, and made Richard Branson its new Chairman.

According to Electrik, an industry site, a new $50 million series C investment round for Virgin Hyperkloop One came from Caspian Venture Capital and DP World.

“DP world invested in several funding rounds of the company and they are working together on a hyperloop project at the port of Dubai,” said Electrik.

Dubai-based DP World is the Middle East’s largest port operator and has a portfolio of over 65 marine terminals across six continents.

Branson, who was appointed chairman of the new company, said the project would “enable ultra-fast, on-demand deliveries of high-priority goods”.

“On-demand deliveries are a novelty today. Tomorrow it will be the expectation.”

Hyperloop CEO Rob Lloyd said a 10-15 kilometre demo track would be built first before construction began along the full route.

“To address this challenge we’re joining with DP World, a global expert in trade and supply chain logistics, and are introducing DP World Cargospeed–an international brand for hyperloop-enabled cargo systems to support the fast, sustainable and efficient delivery of palletized cargo. Designed to provide exceptional service for high-priority, on-demand goods, DP World Cargospeed systems will deliver freight at the speed of flight and closer to the cost of trucking,” Lloyd said.

“We will have an international group certifying this technology for safety and regulatory approvals for 2022,” he said.

Read: Why Hyperloop and Saudi are a match made in travel heaven

The first phase of each project will cost between $300 and $500 million, while a full network carrying millions of passengers a year will require investments ranging between $3 billion and $15 billion, Lloyd said.

The first full super-fast rail network is expected to be in commercial use by 2025, he said.

Here’s a video about how they plan to leverage the technology to create “DP World Cargospeed”:

The Dubai Airshow has grown exponentially since 30 years ago.