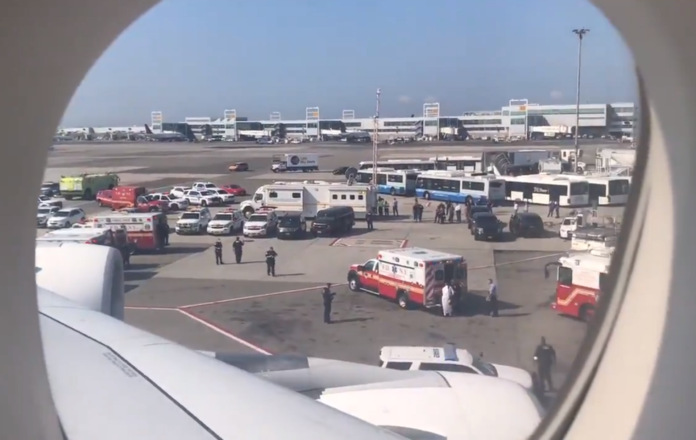 Crew of quarantined Emirates possibly behind the “flu” incident?

Emirates Airlines could have a scandal on its hands.

An Emirates flight departing from Dubai was quarantined at arrival at John F. Kennedy Airport in New York yesterday.

The quarantine was imposed following reports that many onboard had fallen sick, showing symptoms such as coughing, sneezing and a fever, according to a statement the Center for Disease Control (CDC) made to TIME magazine.

Is the incident a case of a few passengers falling with the flu, or is it something more severe?

Amidst conflicting reports, how many were sick exactly?

The plane, which several media outlets report to have been carrying around 549 people, had just completed a 14-hour trip.

Several of the passengers were returning from their Hajj pilgrimage at the holy city of Mecca, and were on their way back home.

Among the passengers was Vanilla Ice, a rapper famous throughout the 90s. Apparently, he was on the upper deck of the plane while most of the infected were on the lower deck, according to one of his tweets.

Initial information by the CDC put the number of the sick at around 100, but recent info by Eric Phillips, press secretary for New York City Mayor, seems to provide the more concrete numbers.

“All the passengers are off and have been evaluated. 19 sick. 10 to hospital and 9 refused medical attention,” Phillips said in a tweet. “Health officials are processing tests now to determine the cause. Symptoms still pointing to the flu.”

It seems that initial reports were overblown, and that Emirates’ disclosed number of infected, which they claimed was 10, was actually closer to the truth.

Emirates’ latest media statement seems to corroborate this info: “Emirates can confirm that all passengers have disembarked from flight #EK203. All passengers were screened by local health authorities prior to disembarkation. 3 passengers & 7 crew were transferred to the hospital for further medical care and evaluation.”

Passengers not to blame?

While initially it was considered that some of the Hajj pilgrims could have been infected prior to boarding, given that the pilgrimage groups together thousands of people from all around the world in one location, it seems that the majority of the sick are in fact crew members.

This could lead to Emirates Airlines screening their crew members regularly in the future, conducting medical checks before flights to avoid a repeat of this scenario.

Many airports already utilize thermal imaging to screen for flu-patients – perhaps Middle Eastern airports such as DXB need to install them as well. However, these thermal cameras can only detect high body heat, not the flu itself. They are good for spotting a fever.

The price of these devices could range from $3,000 to $15,000. They are not fault-proof, however, and many infected have slipped through over the years, research site eLife notes.

How often does this happen?

Following recent scares, such as during the Ebola outbreak in previous years, airports have been forced to take extra caution at the slightest sign of disease, even if it appears to be nothing but the flu.

In 2014, the CDC quarantined a flight a United Airlines flight in New Jersey after it had arrived from Belgium. A passenger was reported to be vomiting during the flight, and as subsequently placed in medical care upon arrival. His original point of departure was Liberia.

The man and his daughter were taken to a hospital, and the case was resolved with no incident. The man was found to be ill with a minor, treatable sickness.

In 2013, a flight from Chile to Australia was also quarantined. The media reported at the time that 26 passengers had fallen sick with a norovirus that triggered a “mass vomiting” incident. The infected were mostly school students returning home, 16 of which were hospitalized.

Another case was reported in 2012, when a flight arriving in Chicago from Africa was seen with a rash suspected to be contagious, akin to monkey pox, a disease that is found in central and west Africa. Like most plane quarantine cases, however, the rash was found to be non-contagious, and the man was eventually cleared.

Airports have a tendency to be overly cautious, as the smallest misstep could cost lives. This is especially true whenever a disease outbreak is on the loose, or when passengers are arriving from a country where certain deadly diseases are known to originate.