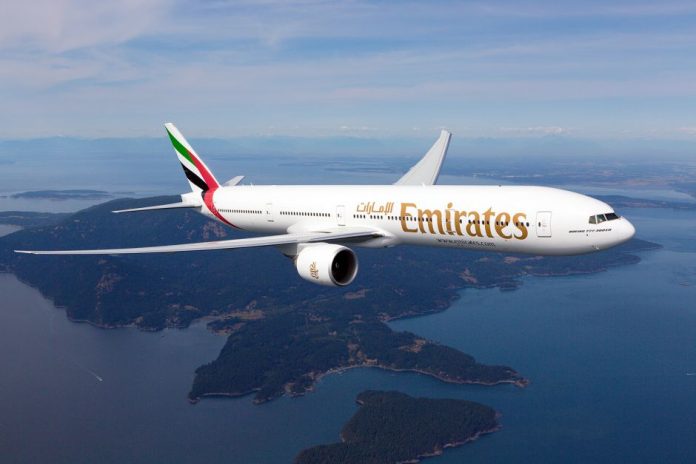 The 15th Dubai Airshow 2017 opened its doors at DWC, Dubai Airshow Site today, November 12, to a record number of exhibitors, aircraft on display, visitors – and an array of ground-breaking deals.

Read: Can the Gulf survive the retail apocalypse?

Sheikh Ahmed said, “Emirates’ orders today will be delivered from 2022, taking the airline well into the 2030s. Some of these will be replacements so that we maintain a young and efficient fleet, and others will power our future network growth. We see the 787 as a great complement to our 777 and A380 fleet, providing us with more flexibility to serve a range of destinations as we develop our global route network.”

McAllister said, “We are excited that Emirates has selected the Boeing 787-10 Dreamliner to power its fleet expansion and future growth. This is an airplane that will set a new benchmark for operating economics in the commercial aviation industry when it enters service next year. Emirates’ endorsement of the 787 Dreamliner extends our long-standing partnership and will sustain many jobs in the United States.”

Emirates’ agreement includes conversion rights to switch the aircraft to 787-9s, offering the airline additional flexibility for its future fleet and global network. Emirates’ Dreamliners will be delivered in a mix of two and three-cabin class configurations, potentially seating between 240 and 330 passengers.

Applying the US Department of Commerce jobs multiplier (every $1 billion in US aerospace exports supports 5,200 American jobs), this new order will create and support over 78,000 additional jobs in US aerospace manufacturing – not only with Boeing, but also with the thousands of other suppliers in the value chain across the US, many of which are medium and small-sized businesses.

Read: Which career are most UAE youth choosing today?

Today’s order comes on top of Emirates’ historic purchase of 150 Boeing 777X aircraft equipped with GE9X engines at the 2013 Dubai Air Show, to be delivered from 2020 onwards.

Emirates’ partnership with Boeing spans decades. Emirates is already the world’s largest Boeing 777 operator and the airline will be first to receive the new 777X in 2020. With today’s announcement, Emirates will have committed to future delivery of 204 Boeing wide-body aircraft.

Emirates also unveiled what it’s branding a “game-changer” in the first class travel market. The Dubai-based carrier’s upgraded 777 fleet will see the introduction of the world’s first fully enclosed private suites, described by president Sir Tim Clark as akin to “a six-star hotel room” in the sky.

The first aircraft in the fleet, flown into Dubai Airshow from Seattle for the unveiling, will shortly begin flying on the airline’s Brussels and Geneva routes, with plans to expand throughout the network as an additional seven or eight refurbished 777-300ERs are completed, before the new look is adapted for the upcoming fleet of next generation 777x.

The UAE Ministry of Defence revealed an order book of more than US$1.77 billion, including the purchase of 60 Lockheed Martin F-16s. The order book includes new deals for international and local companies, including Abu Dhabi Aviation, Thales, Augusta Westland and Global Aerospace Logistics.

Dubai-based flydubai unveiled its brand-new Boeing 737 MAX 8, the first of 76 ordered from Boeing, all of which will be delivered by 2023. Six of these will join the flydubai fleet by the end of 2017.

flydubai Chairman, His Highness Sheikh Ahmed bin Saeed Al Maktoum, said: “[This] is another milestone in Dubai’s aviation success story. The efficiency and enhanced performance this aircraft promises is going to play an important role in the new chapter of flydubai’s growth strategy.” The new Boeing 737 MAX 8s will initially be deployed on the furthest points on flydubai’s network, including Bangkok, Prague, Yekaterinburg and Zanzibar.

Michele van Akelijen, Managing Director of show organisers Tarsus F&E LLC Middle East, said, “The Dubai Airshow has always been the place for the industry to meet and do business, and to see new product launches and industry innovations. The first few hours of 2017 have shown demonstrated this to still be the case and we look forward to what the rest of the week will bring.”

More than 72,500 trade visitors and 1200 exhibitors are expected across the event’s five-day run, representing the entire spectrum of the aerospace industry.

Dubai testing drone detectors after a number of airport incursionsGulfRetail