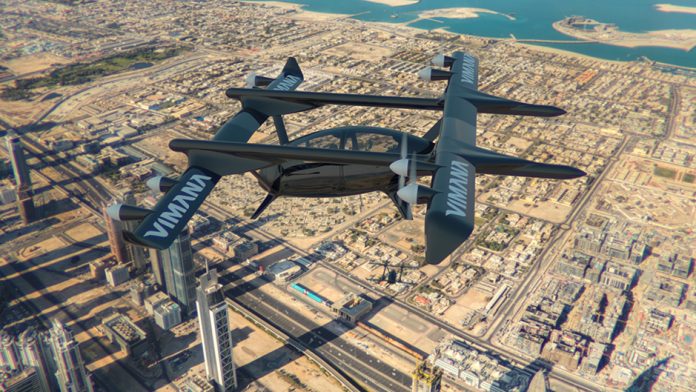 VIMANA, headquartered in Palo Alto, CA, and with offices in the Middle East, among others introduces the first blockchain airspace platform for managing autonomous aerial vehicle flight routes in smart cities around the world.

In highly congested cities like Tokyo and Singapore, it would be very costly to completely overhaul the existing road and rail infrastructure to accommodate rising population sizes.

These cities along with cities like Dubai, which have already invested in technology and have well-established smart city initiatives, are prime locations for aerial commuter vehicles like VIMANA’s AAVs.

The main challenge facing implementation of an AAV network is that existing air traffic control towers are unequipped to manage potentially thousands of AAV flights in a given city.

Blockchain technology is uniquely suited to power VIMANA’s Airspace Management Platform because of its capacity to validate data in a peer-to-peer network.

Each AAV will be a node in the VIMANA network wherein each node validates the flight routes of all other nodes in the network.

This ensures that AAVs do not depend on a centralized authority for determining flight direction.

With all nodes maintaining constant communication with one another, human passengers can simply plug in their final destination and relax as they are delivered to safely and quickly to their stop.

The VIMANA aerospace engineering team is developing a two and four-seater AAV.

The first demonstrations of VIMANA’s unmanned aerial vehicles and Blockchain Airspace Ecosystem will occur in selected Smart Cities like Dubai, and Abu-Dhabi as early as Q1 2018.

Buying a car to avoid VAT next year? Here’s what you...