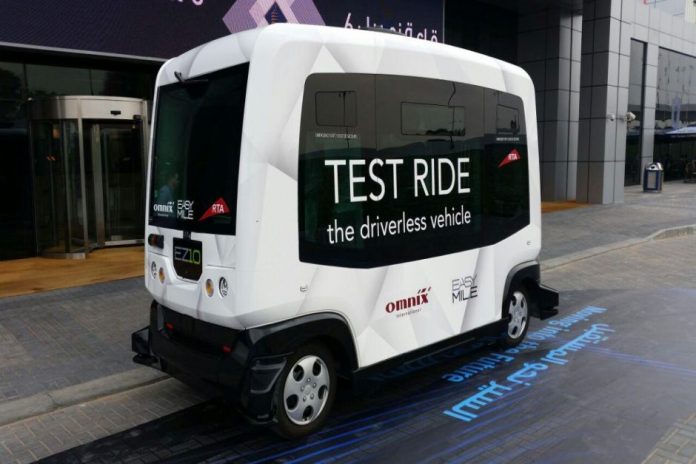 Dubai plans to free up 50 per cent of the land dedicated to car parking spaces by 2030 and use it for new urban development projects, according to the RTA. The emirate’s authorities also aim to automate one in every four journeys in Dubai by 2030 – this will include autonomous buses, the metro, boats, trams, taxis and even autonomous aircraft.

Mattar Al Tayer, the RTA’s director-general and chairman, revealed that some of Dubai’s public transport goals are well under way. “Dubai has also started the test run of driverless mini-buses, vehicles and boats, besides considering the options of deploying driverless express shuttle buses, and taxis from some leading companies,” he said.

Last year, 8.8 per cent of journeys in Dubai were made on the driverless Dubai Metro — with more than 600,000 riders using the service every day. The RTA expects that number to reach 12.2 per cent by 2030.

Serving alongside the metro is the Dubai Tram, which will be fully driverless in the future. By 2030, 6.4 per cent of journeys will be made via driverless buses.

In total, the Dubai Government Smart Mobility Strategy is expected to generate $6bn (AED22bn) per year, reduce mobility spending by 44 per cent and curb demand for parking by 50 per cent.

There are five levels of driverless mobility, according to a US system of ranking. Level 1 means the vehicle can stop by itself when approaching an obstacle. Meanwhile, Level 5 means the vehicle is completely autonomous – so no human intervention is needed at all.

Most commercially available technologies put the level of autonomy at approximately Level 3.

This means that a vehicle can be operated without a driver for limited periods in normal circumstances, but still needs human intervention under certain conditions.

Driverless transport faces four key challenges, both in Dubai and worldwide, Al Tayer told the audience at the summit.

These are: Infrastructure, which includes high-quality maps; and road markings; laws and legislation; safety and public acceptance; and technological requirements such as the efficiency of sensors and cameras.

Through its test runs, the RTA intends to educate the public about self-driving transport and the experimental use of these vehicles under the Dubai climatic conditions. It also seeks to educate the public about the Dubai Government Smart Mobility Strategy launched by Sheikh Mohammed bin Rashid Al Maktoum, Vice-President and Prime Minister of the UAE and Ruler of Dubai, aimed at making 25 per cent of total journeys in Dubai run via self-driving transit modes by 2030.

HE Mattar Al Tayer, Director-General and Chairman of the Board of Executive Directors of the Roads and Transport Authority (RTA) said: “The RTA has a package of road and transport projects to display in the Exhibition along with smart services & initiatives in the field of innovation and smart mobility. The selection of initiatives for display during this showpiece was based on several standards highlighted by the wide reach and focus on smart services, innovation and excellence.

“During the exhibition, some key projects will be displayed such as a huge model of Route 2020 project. It involves extending the Red Line of the Dubai Metro from Nakheel Harbor & Tower Station to the site of Expo 2020 over a 15 km stretch. It comprises a 11 km-long viaduct and 4 km-long underground rail track. It will encompass seven stations: five elevated and two underground stations,” added Al Tayer.

The RTA will also exhibit the awards obtained in the Hamdan bin Mohammed Program for Smart Government 2016 highlighted by the Flag of the Program awarded to the RTA for the second time. In the process, the RTA has clinched seven awards of the Program namely: Best partnership with the public, smart tariff initiative, best partnership with the private sector (the smart shelters initiative), best government service via the mobile phone (the smart app RTA Dubai), customer’s life (smart common app), best call centre (8009090), best innovation team, and the best innovation leader.

Through its stand, the RTA will offer visitors free NOL cards enabling them visiting the Etihad Museum; one of the biggest achievements of the RTA accomplished in December 2016.

Held under the auspices of HH Sheikh Mohammed bin Rashid Al Maktoum, Vice-President and Prime Minister of the UAE and Ruler of Dubai, the Dubai International Government Achievements Exhibition, promises to be an important platform for showcasing the achievements, initiatives and projects of Dubai Government entities under one roof. The event takes place on 2 – 4 April from 9am-6pm at Dubai World Trade Centre.