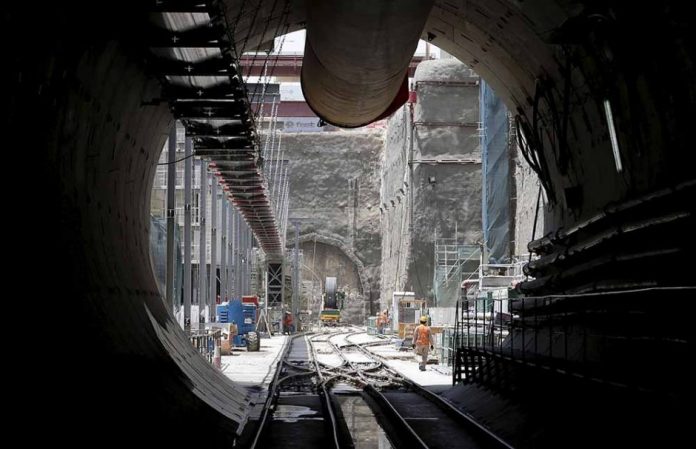 The first test of the Haramain Train traveling from Jeddah, the second largest city in the kingdom, to Muslim’s holiest city of Mecca was recently (October 17) completed by the Saudi Railways Organisation (SRO).

The project aims to connect Jeddah and King Abdallah Economic City (KAEC), located approximately 100 km north of Jeddah, to Mecca and Medina in less than 2 hours at a top speed of 300 km per hour.

Rumaih Al-Rumaih, President of the SRO, told Kuwait News Agency that the test run was a success.

The Haramain project will stretch for 450,000 kilometres and is expected to transport approximately 60 million passengers annually.

The significance of the trial goes beyond linking two points on a map without incident to highlight how far Saudi Arabia has gone into overcoming delays and modernizing its transport systems.

Watch: VIDEO: Inside the Remaking of Saudi Arabia

Transport spending back on track

Saudi’s National Transformation Plan 2020 (NTP 2020) places the transport system, with projects like Riyadh Metro, Haramain and others, as a vital piece of the puzzle, when looking at overhauling the country from an oil-based economy to a non-oil one.

The private sector will play a bigger role in this, as indicated by the NTP, where participation in rail projects is aiming at 50 per cent involvement by 2020.

An August report by the Oxford Business Group (OBG) said: “The 2017 budget, spending on transport and infrastructure developments has increased, rising from $10bn in actual outlays in 2016 to $13.9bn earmarked for this year.”

The spending results of Saudi Ministry of Finance in the second quarter indicated that 24 per cent of the transport and infrastructure budget was spent in the first half of 2017, leaving $10.6bn to be spent this year.

OBG said that the long awaited $17bn, 149-km Mecca metro network, which will have links to the Haramain, was to be tendered by the beginning of 2018.

“The move to speed up the project shows that interest in big-ticket transport projects is returning after two years of constraints due to fiscal tightening,” OBG reported Benjamin Highfield, Executive Vice-President of Construction and Business Consultancy HKA, as telling local Saudi media.

Earlier in March, Rumaih alluded to the fact that public-private partnerships (PPPs) could pave the way forward as funding mechanisms for mega transport projects such as Mecca and Jeddah metros, but also for future ones such as those in Dammam and Medina.

According to OBG, Bashar Al Malik, Chief Executive of SAR, announced the company’s intention to invite the private sector to build and operate the $7bn, 958-km Saudi Landbridge project, which links Jeddah City on the Red Sea with Riyadh and Jubail on the Gulf and which is set to begin in early 2018.

Riyadh metro on track for 2018

176 km of tracks define the Riyadh metro project, which spreads over six lines and is able to carry 3.6 million passengers a day, worth over $22bn and slated for completion at end 2018.

“Once operational, the metro have a number of direct knock-on effects for the economy, including an increase in productivity; faster commutes could not only reduce time lost by workers stuck in traffic, but also offer the potential for commercial and office developments away from existing centralised business hubs,” said OBG’s report.

The cost of linking Mecca and Medina via Jeddah was estimated by SRO at $14bn, following a revision of an earlier figure of $11bn at the beginning.

In 2009, it was optimistically slated for a three-year completion, but it is only eight years after that we started to see the first test runs.

According to a May 2017 Reuters report, Jeddah’s government has held initial talks with banks to help secure funding for a multi-billion dollar, 800 km metro, light rail, tram, and rail among others.

It said that in 2013, the Saudi government announced a $12 billion budget for the 7-year project.

“Saudi Arabia is cancelling or delaying many infrastructure projects as a result of lower oil prices but is proceeding with those it deems of strategic importance,” said Reuters adding. It added: “The project would likely be developed under a BOT contract.”

The Saudi Public Transport Authority (PTA) issued last July an “Expression of Interest” with a December 2017 deadline, seeking to enter into long-term partnerships with leading international railway companies and investors to provide passengers and freight train services in the country.

“Enhancing the private sector participation in the Kingdom is a corner stone of the Saudi Vision 2030, with objective to increase operations excellence, to establish a new performance culture and quality as well as to reduce the dependency on the government,” said the PTA statement.